Garden Pests Are No Match for Organic Diatomaceous Earth

Diatomaceous Earth, derived from the fossilized remains of Diatoms, is a deadly weapon against many garden pests. Unlike chemical pesticides, it poses no risk for kids, pets, wildlife or you.

It’s a beautiful spring morning. You go outside for your daily stroll around your garden and you stop short when you pass the hostas (lilies). Was someone using them for target practice last night? The foliage was beautiful yesterday and this morning it’s riddled with holes inside and at the edges. In less than twenty-four hours your hosta has gone from showcase quality to in-need-of-emergency-care.

Slugs and snails can create this damage in just one night

When plants develop damage like this seemingly overnight, the culprit is usually slugs or snails, which are also known to snip off tender shoots, including flowers and fruit. This damage creates stress on the plant and when the foliage is full of holes, a reduced ability to perform photosynthesis. The result is reduced growth and conditions favorable for other pests and diseases to attack the plant while it’s in this vulnerable state.

Slugs and snails crawl over your plants at night and cloudy days, chewing their way through your garden. When the sun is shining they hide where it’s cool and damp – usually at the base of the plant near the soil, or on the underside of large leaves. A dead giveaway of their presence is a “slime trail” – a track of mucous running down the leaves, usually on the underside.

In your panic, you might be inclined to grab a bottle of chemical pesticide and obliterate whatever it is that’s eating your plants, but that’s always a bad idea. Chemical pesticides may kill the target pest, but they’re also frequently toxic to birds, fish, and mammals-including you, your family, dogs and cats and other wildlife.

Getting rid of slugs and snails

For slugs and snails there are a number of well worn remedies which work quite well, such as removing leaf litter from your garden bed (depriving them of any cool, damp hiding place); hand picking; beer traps; and generally making your garden less hospitable to the critters. If those methods fail to reduce or eliminate the damage, then it’s time to use an organic pesticide and one of the most effective is Diatomaceous Earth. DE as it’s known, was used widely for about one hundred years before chemical pesticides were invented. Now that the dangers of chemical pesticides are well documented, DE is once again returning to use in agricultural and gardening circles.

Diatomaceous Earth is a 100% organic pesticide, derived from the fossilized remains of Diatoms, a type of hard-shelled algae. Diatoms are phytoplankton used as food by freshwater and marine animals. When they die, their skeletons settle to the ocean or lake floor and over time become thickly fossilized deposits. These are mined and milled and sold as various grades of DE for industrial and agricultural applications.

What Pests does Diatomaceous Earth control? 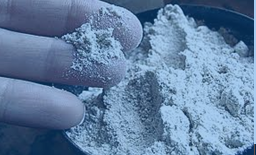 Open a bag of DE and you’ll see a light, white powdery substance which looks and feels remarkably like talcum powder. To garden pests however, the tiny particles are razor sharp and will slice their exoskeleton when they climb across it. The lacerating of their shell exposes the creature’s inner soft tissue to air, effectively dehydrating the pest within a day or two. If that creature ingests any DE, it will shred their insides. DE is a real death sentence for them, but it’s absolutely safe for mammals, birds and fish. In fact, food grade DE (the grade you apply to the garden) is added to grain shipments to keep them free of pest infestation.

How to use Diatomaceous Earth

Only use DE when dry weather is predicted for 72 hours, accompanied by low humidity. Diatomaceous Earth is about 80% silica, so when it comes in contact with high humidity or water, it absorbs a great deal of moisture, cakes up and loses its effectiveness. To apply, sprinkle it on the underside of affected leaves, around the base of the affected plants, and on the ground surrounding them. In a day or two, any further damage to your garden should noticeably cease.