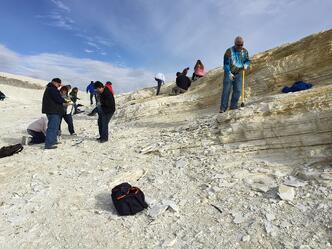 Last week, 48 teachers from Lyon and Churchill Counties in Northern Nevada took a grant-supported graduate-level, for-credit course called Earth Systems Matter, at the EP Minerals Hazen, Nevada diatomaceous earth (DE) mine. This was no ordinary tour, mind you. Not only did the teachers learn about the history and geology of DE (from Mine & Exploration Manager Skylar Burdette,) they also got to dig for 10 million year old stickleback fish fossils. EP regularly offers this class to Nevada teachers- it’s critical that teachers go back to their classrooms and teach their students about the importance of mining and minerals in our lives. 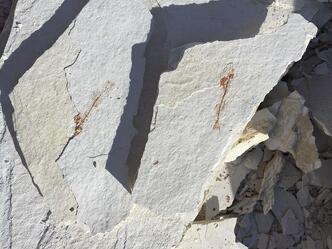 EP Minerals diatomite mine near Hazen is where Late Miocene (9-10 million year old) stickleback fish (Gasterosteus doryssus) fossils are abundant within the layered diatomite sedimentary rocks and may be collected with some perseverance and good luck!

HOWEVER every piece of rock you pick up here rock here contains thousands, even millions, of fossils since diatomite itself is composed of the fossilized skeletal remains of diatoms. Diatoms are microscopic planktonic creatures that inhabited a lake that existed here between 9 and 10 million years ago in a narrow north-south-trending fault-bounded basin, one of many that were forming in northwestern Nevada at the time, as the Basin-and-Range topography of Nevada was beginning to take shape. 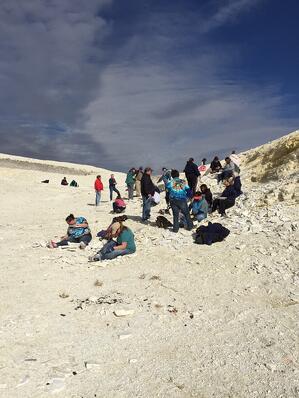 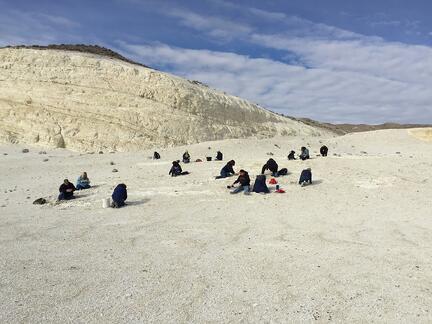 Teachers hunt for fossils at Hazen DE mine