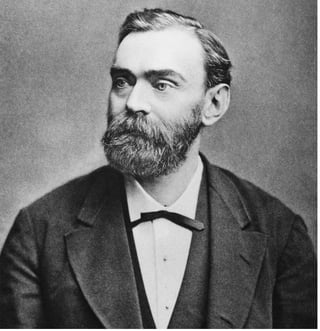 183 years ago today, the famous chemist Alfred Nobel was born in Sweden. You probably know his name because of the Nobel Prize, the highly respected award that is given in the fields of peace, literature, chemistry, economics, physics and medicine. But Nobel is also well-known for something else – dynamite. The material that Nobel mixed with nitroglycerin to form dynamite was diatomaceous earth!

Nobel, a chemist from Sweden, invented dynamite in 1867. Alfred's father ran a company that made explosives. One of these explosives was "nitroglycerin." Nitroglycerin was used to blast rock in mines, to make tunnels, or to flatten ground for construction. It was very unstable, though. Simply shaking a bottle of nitroglycerin was enough to make it explode. Alfred Nobel discovered that he could make it more stable if he mixed it with an absorbing material. This made it into a paste that could be shaped.

Alfred formed the dynamite paste into cylinder-shaped sticks. This made it possible for it to be placed in holes drilled in rock. Nobel also designed a blasting cap for dynamite that could be ignited by lighting a fuse. Dynamite was much safer to transport than nitroglycerin, and it became widely used as a safer mining explosive.

The material that Alfred Nobel mixed with nitroglycerin to form dynamite was "diatomaceous earth," a soft rock mostly made of prehistoric fossilized algae. It is used in hundreds of products and applications today, including filtration, paint, kitty litter, insecticide, animal feed, and fertilizer. Learn more about Diatomaceous Earth

Dynamite is often confused with another explosive known as "TNT." They are actually very different. Dynamite is stabilized nitroglycerin, while TNT is short for its chemical name, trinitrotoluene. TNT was first used as an explosive in 1891.

Alfred Nobel's final will included instructions to create "The Nobel Prize." After his death in 1896, his fortune was used to fund the yearly prizes that bear his name.

Some companies started by Alfred Nobel are still in operation. One example is Dyno-Nobel, which sells mining explosives in the United States, Canada, and several other countries.

Thanks to resource softschools.com for the nice write up on Alfred Nobel.

Learn more about the hundreds of other applications for Diatomaceous Earth here: DE Applications