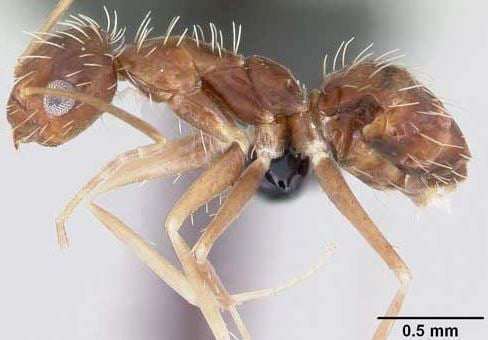 A few years ago when we first started working on our DEsect® organic insecticide, I noticed that “crazy ants” were on the list of insects that DEsect would kill. At first, I thought our product manager was playing a joke on me. I’d never heard of crazy ants before, and we did list other kinds of ants in addition to the largest number of insects killed on the label. I did a little research. Crazy ants are a real thing, and they’re terrible. Here’s a recent post by Laurie Garretson, gardener/nursery owner, that includes using diatomaceous earth (DE) to kill those crazy ants!

Every gardener is well acquainted with ants. Especially fire ants. These little pests can be a big problem in our gardens, and they certainly can hurt when they sting.
There's a newer ant on the scene these days. The crazy ants were first detected in Texas in 2002. Their name is derived from their erratic movements. These ants are usually found in very large numbers. The good news is they seldom bite; the bad news is they are invading the Gulf Coast area by the trillions.

Crazy ants are scavengers, predators, and foragers that will search for food day and night. Their diet usually consists of anything that's sweet, including human food. Their diets can also include the honeydew that's excreted from aphids, white flies, mealybugs and scale insects.

Crazy ants are quickly becoming a big problem in all areas of the country where they are now found. Here in Texas, the odds are that they will soon take over the previously dominate fire ants because crazy ants aren't affected by fire ant stings.

Crazy ants produce a chemical that they rub on themselves that acts as an antidote to the fire ant venom. This same chemical, formic acid, is also used by the crazy ants to spray on enemies as a defense mechanism. Fire ants have totally met their match.

A big problem with the crazy ants is that they use any place they can get into for nesting. Whether it be your house, an electric meter, your car, other ant mounds, etc. Since they are such tiny ants, the possibilities of their nesting sites are unlimited. And since their populations are big, eliminating them is difficult. For all the thousands that you kill, there seem to be trillions more to take their place.

As of now, treating infested outdoor areas with beneficial nematodes, along with diatomaceous earth (DE), seems to have helped in some locations. When dealing with the ants indoors, it can help to keep a band of diatomaceous earth across doorway thresholds and on all window sills. You can also use a diluted solution of orange oil as a contact kill insecticide for these pests.

Trillions of crazy ants? Eww. No thanks. I'm getting out my DEsect.