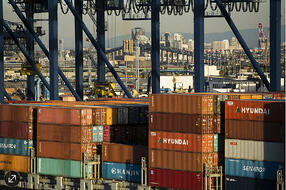 It’s an incredibly frustrating situation. We're seeing very strong demand for our industrial minerals - diatomaceous earth (DE) and perlite. Our Nevada plants have been working hard to fill customers orders as soon as possible. We’ve invested significant capital in our plants this year to increase our efficiency. Operations is working full throttle. But the product is just sitting in West Coast ports. On trucks and in rail cars waiting to ship to customers. And, our stockpiles grow daily.

It’s been almost eight months since the West Coast port labor dispute started between the International Longshore and Warehouse Union and the Pacific Maritime Association. Little to no activity has occurred and last week the situation got even worse with the unions refusing to unload containers at night. Containers are stacked 6 high for miles and miles in all the West Coast ports.

It’s a product and productivity nightmare, but not just for EP Minerals, Nevada's largest exporter.

From the Wall Street Journal this week, “The near-paralysis at the ports is rippling through the economy. Railroads are reducing service to the West Coast. Cargo ships have slowed down—and even turned around—as containers have stacked up at the ports. And an official of a meat-industry trade group said last week that port gridlock was costing meat and poultry companies more than $30 million a week. The delays, congestion and fallout have cost “hundreds of millions to a billion” dollars in lost productivity and missed opportunities, said Jeffrey Werling, executive director at INFORUM/University of Maryland. “It’s eating away at US productivity.”

Meanwhile, meat freezers on the West Coast and in the Midwest are filling up as port backlogs force more companies to store meat awaiting shipment overseas, according to Bill Westman, senior vice president of international affairs at the North American Meat Institute.

On average, meat can be sold as fresh only for about 30 days. After that it needs to be frozen, which can cut the price of some products in half, the trade group said. “We have lost our fresh-meat business because all of that product has a shelf life,” said Mr. Westman.

Manufacturers all over the country are feeling the pain. The National Association of Manufacturers has heard from members that container shipments through the West Coast ports in recent months have become “incredibly erratic,” said Robyn Boerstling, director of transportation and infrastructure policy for the trade group. “Everyone is feeling extremely uneasy and frustrated,” she said. Companies fear that if they can’t deliver on orders it will be very hard to win business back, she said.

A story in today’s Farm Futures reports that 90 Ag groups rallied today against the labor dispute that is impacting meat and Ag exports, claiming that the dispute is costing agriculture millions. One estimate has the U.S. meat and poultry industries losing more than $30 million a week due to the bottleneck.

From yesterday’s JOC.com (Journal of Commerce): “Vessels are backing up at an alarming rate at West Coast ports due to congested marine terminals and work slowdowns by the International Longshore and Warehouse Union. The Marine Exchange of Southern California reported Wednesday that 17 container ships were at anchor and awaiting berths in Los Angeles-Long Beach. Oakland reported that five container ships were at anchor, and Tacoma reported six at anchor."

This is a dangerous condition because vessel backlogs upset the weekly scheduled sailings from Asia to the West Coast, and that has a cascading effect throughout the market. The Paris-based consultancy Alphaliner reported this week that vessels have been thrown off schedule by as many as three weeks, forcing carriers to add 36 additional ships to their trans-Pacific rotations to the West Coast. Alphaliner said that it is now the “worst-ever case of U.S. port congestion on record.”

Recent reports claim that the contract for the 42,000 dock workers may be getting closer to resolution, but then what? Export experts forecast that it will take months to get the ports back to normal.

Meanwhile, EP has been scrambling to redirect product shipments via other ports, truck and rail, to get orders to our customers in any way we can.

Please reach out to your sales representative for information about your specific order status.