In his own words: Steve Blackhall, director of HR, EP Minerals

Number of years in this job: 9

Years in this profession: About 22

Last book read: “The Advantage,” by Patrick Lencioni. I have two books I am reading right now: “Nine Men in a Boat,” by Dennis Rose and “Zen and the Art of Motorcycle Miantenance,” by Robert Pirsig

Favorite flick: “The Good, the Bad and the Ugly”

Spouse, kids or pets: My fiancée is Megan Wiley. We have two dogs: Madison, a chocolate lab; and Franklin, a miniature pinscher. You have to pronounce “Franklin” like it is a cuss word; he is the spawn of Satan.

Northern Nevada Business Weekly (NNBW): Tell us about EP Minerals and your responsibilities.

Steve Blackhall: EP Minerals is the second-largest producer of an industrial mineral called diatomaceous earth. It is used as a filter aid and as a functional additive in everything from paints and plastics, the brewing of beer and wine, to cosmetics and dental products. We also produce perlite, a volcanic ash that we also sell in the same capacity. We have five plants and mines between Nevada, Oregon and Tennessee and have sales operations on every continent. My role is to handle all labor and employee relations for the Nevada and Oregon sites and global recruiting. I am involved in lots of different projects, but the vast majority of my time is spent on recruiting and labor relations.

NNBW: How did you get into this profession?

Blackhall: I’ve spent my whole career in human resources — I sort of landed in it in college. I did an internship with the headquarters of Jack in the Box and was recruiting, and from there I got my first real human resources job with PepsiCo at their San Diego bottler. It was my first experience with unions and with staffing in a manufacturing plant. With my boss I was handling HR for San Diego, Bakersfield and Brawley, Calif., and Las Vegas. It was where I cut my teeth in HR.

NNBW: What do you like most about working as an HR professional?

Blackhall: I like the fact that I get to do a lot of cool stuff behind the scenes. When it comes to the recruiting process, I am not always the lasting image a candidate has when they get hired, but I facilitate that process and make sure our managers here are making the right decisions. It also is pushing candidates who are a little reluctant to move to make that decision. On the union negotiation side, I love the planning process. I like the interaction at the table, especially when you have mutual respect and we are both trying to get to a good spot. I also like being part of something that truly is bigger than me, and EP Minerals affords me that. It has been a career-defining position.

NNBW: How did you get hired on with EP Minerals?

Blackhall: I had a couple jobs after Pepsi, most recently with James Hardie. I was in their Fontana plant and got asked to come up and do the startup with their Reno plant. I got recruited away by EP Minerals.

NNBW: What is the most difficult aspect of working in HR?

Blackhall: A lot of it has to do on the recruiting side. There is a lot of competition for the top talent and getting people to take that leap and change jobs. They want to get dressed up and go to the dance, but when it actually comes time to go into the ballroom and do the dance, that’s a little more difficult. We have to deal with wage constraints and a lot of fierce competition. We also look for the needles in the haystack, and I have been real successful at filling some difficult roles.

NNBW: What do you like most about working for EP Minerals?

Blackhall: I get to work with some of the smartest and best people I have ever known. We are a collection of type-A personalities who like each other and are not afraid of conflict. I work with people I like and the fact that I recruited most of them is nice because I’ve built a relationship with them over the years.

NNBW: What were the main impacts of the recession in the HR department at EP Minerals?

Blackhall: We were coming into a year where we were negotiating a new contract with the union, so we had to go in with a very aggressive proposal on wages and benefits. On the recruiting side we had to be more vigilant on what kind of compensation we were offering. But we didn’t want to compromise on quality.

NNBW: What was your first job?

Blackhall: I was a dishwasher at the Narrow Gauge Inn in Fish Camp, Calif., a small town on the south end of Yosemite National Park. When I grew up there it had a population of 36. I was without a doubt an abysmal dishwasher. I would let them get all piled up. They probably would have fired me if there was someone else they could have hired.

NNBW: What’s your dream job, and how come you aren’t working it?

Blackhall: I think I am in a lot of ways. I have never had a job where I’m enjoying doing what I do as much as now. I have a lot of fun. I work my tail off, and it’s a lot of hours, but I’m doing something I know how to do well and like. But if I was going to be completely selfish and money didn’t matter, I would be a ski instructor.

NNBW: Have any advice for someone who wants to enter the HR profession?

Blackhall: Get a mentor. Don’t worry about becoming the VP of human resources tomorrow. The journey is sometimes so much more fun than the actual destination. Get a mentor and learn the trade, whether it is the administrative stuff of working on a computer system or recruiting low-level warehouse guys, learning the trade is really important. I had two great mentors in my career, and I don’t think I would be doing what I am doing now if it had not been for them. They rode my ass, and they were hard to work for, but they were invaluable.

NNBW: How do you spend your free time away from work?

Blackhall: When I am not chasing Franklin, the Spawn of Satan, I am a really avid skier. I was a competitive cyclist for years when I was in Southern California, and I still get out to ride quite a bit.

NNBW: What did you dream of becoming when you were a kid?

Blackhall: A professional skier. I wanted to be like Franz Klammer or Ingemar Stenmark.

NNBW: If you had enough money to retire right now, would you? Why or why not?

NNBW: What’s the last concert or sporting event you attended?

NNBW: What’s your idea of the perfect vacation?

Blackhall: Anywhere with Megan where we have lots of outdoors activities. We like to stay active.

NNBW: Why did you choose a career in northern Nevada? What do you like most about working/living here?

Blackhall: I came up here because I was asked to. I had no idea what to expect. Once I got into the culture of northern Nevada and got myself established, it quickly dawned on me that it was a place I wanted to stay. It’s really an ideal place to live. 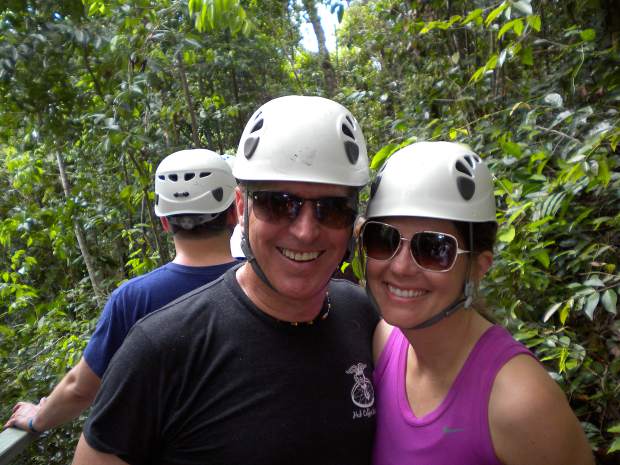