Arsenic in the water is a problem around the world today. It’s in groundwater, and it can seep into local water systems and private wells. While it’s an element found in the earth’s crust from millions of years ago, it can be very toxic in high levels.

According to the Center for Public Integrity, arsenic is known to cause a variety of cancers as well as being linked to heart disease, strokes and diabetes. Recent research has found an association between arsenic and IQ deficits in children. If you drink water from a private well, it’s unlikely that it’s ever been tested for arsenic.

More than 40 million Americans drink from such wells; of those, the U.S. Geological Survey estimates that as many as 3 million consume water that wouldn’t meet the EPA standard.

The World Health Organization (WHO) states that arsenic is naturally present at high levels in the groundwater of several countries including India, Africa, several parts of Europe and in here in the states in Nevada, New Mexico, Arizona, Texas and California. WHO states that the most important action is prevention of further exposure to arsenic by a provision of a safe water supply.

And that’s where NXT-2 comes in. Recently I sat down with Sidney Mascarenhas, EP Minerals' Water Technical Sales Manager, and Paul Fish, Director of New Business Development, to talk about NXT-2, our patented filtration product that will remove arsenic from water.

It is a mixed metal adsorptive media used to remove contaminants from drinking water. Because of what it’s made of, it has a certain chemical attraction to chemicals like phosphorous & arsenic. By using NXT-2 as a filter aid and keeping contaminated water in contact with the NXT-2 for a certain amount of time, the contaminants are removed. You end up with a waste product with all of the contaminants.

What does adsorptive mean?

It’s the bond or adhesion between the surface of our product and the contaminant. It holds it on the outside; it doesn’t take it into the product like a sponge.

What are the biggest problems that NXT-2 solves?

NXT-2 is the filter media that works in an arsenic removal system. The biggest problem that it solves is removing arsenic from industrial and potable water. NXT-2 also removes phosphorous.

Why is arsenic bad?

It’s a carcinogenic. Long-term exposure to arsenic in drinking water can cause cancer in the skin, lungs, bladder and kidney.

Phosphorous leads to algae growth that leads to out of control bacteria growth. Excessive algae growth leads to eutrophication. This is when the lake becomes rich in dissolved nutrients and deficient in oxygen. This can lead to risks to people when the algae blooms are near drinking water intakes. Fish and other wildlife may become poisoned and die from the water.

How did NXT-2 get developed?

NXT-2 was developed through a partnership with the University of Nevada, Reno, and it was designed to solve the arsenic in water problem. Our background with filtration and ability to bring new products to market has made for a great partnership with UNR.

How long has EP Minerals been making it? NXT-2 has been commercially available since 2010.

What is in NXT-2? It’s a patented iron & lanthanum blend that includes diatomaceous earth (DE). Lanthanum is a rare earth element. Both of iron and lanthanum have an attraction to phosphates and arsenic – the contaminants in water.

How does it work? When the contaminants in water contact NXT, they form stable compounds on the media through chemical interaction.

What problems does it solve? It removes arsenic in typical and challenging environments. It reacts best with high pH and high competing ions. And, the NXT-2 retains the removed arsenic so that it’s not released back into the environment.

Where and how is NXT-2 used?

It’s used by private individuals up to city water treatment systems. Around the world, we have customers using it in mining and we’re in ongoing testing for use in coal fired boilers (power generation) –it’s always the same purpose, to remove arsenic from water.

Where is the arsenic in the world?

Arsenic is naturally occurring around the world, created by glacial events millions of years ago. High arsenic levels are found in the US in California, Arizona, New Mexico and Nevada. It’s commonly found in areas that are good for farming. Chile, Argentina, the UK, India and Bangladesh have the biggest problems in the world. It can also be very localized so places only a few miles from each other will have different situations. 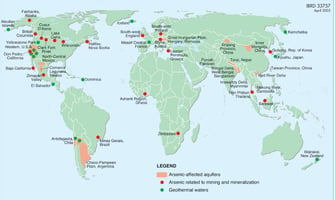 Arsenic-affected areas in the world, worldbank.org

Why is NXT-2 unique? It’s unique because we have a patent. Our product has been proven to be more robust and effective, especially where there are competing ions. Other products work on the same mechanism but this product is unique.

When is NXT-2 most effective?

Arsenic removal is dependent on the quality of the water & the pH. NXT-2 is more effective with high levels of competing ions and higher pH levels. With NXT-2, the bond of arsenic is very strong – and so it doesn’t release the contaminants back into the environment. NXT-2 is also stronger over a wider pH range.

Why do we need to remove arsenic? Public health. There are international and national standards for drinking water. In 2006, the US dropped their limit from 50 ppb to 10 ppb to match the world health org standard. Other countries have higher limits but those are decreasing.